While a lot of students were headed to the beach or just traveling home on the weekend of Spring Break, Hendrix Mock Trial’s Blue Team was in Decatur, Georgia competing at the American Mock Trial Association’s Opening Round Championships for the second straight year. What makes Hendrix’s back-to-back bids to ORCS even more impressive is the fact that Hendrix’s Mock Trial program is only 5 years old.

Mock Trial is an academic competition that is exactly what it sounds like: a simulation of legal proceedings, with team members playing various roles both in the prosecution and the defense. Hendrix Mock Trial is big enough to actually field two teams of students filling the various attorney and witness spots, Red Team and Blue Team.

Mock Trial President Sami Sexton notes that the team is made up of a variety of studernts from a variety of interests.

“It’s not just for people who want to go to law school!” Sexton said. “While it is a valuable experience for anyone considering law school, we also have several members of our teams who are not planning to go. It’s great for anyone who wants a fun competitive event in public speaking or acting.”

In the short time that it’s been around, Hendrix students have won numerous individual awards for both Attorney and Witness performances. At this year’s ORCS, Hendrix won its first award as a team as the recipient of the Spirit of AMTA Award. This recognized the fact Hendrix best exemplified the ideals of the AMTA – civility, justice, and fair play. In addition to finding success at various competitions, Hendrix’s Mock Trial Team actually hosted a tournament for high school teams on Hendrix’s campus for the first time on February 25th of this year. 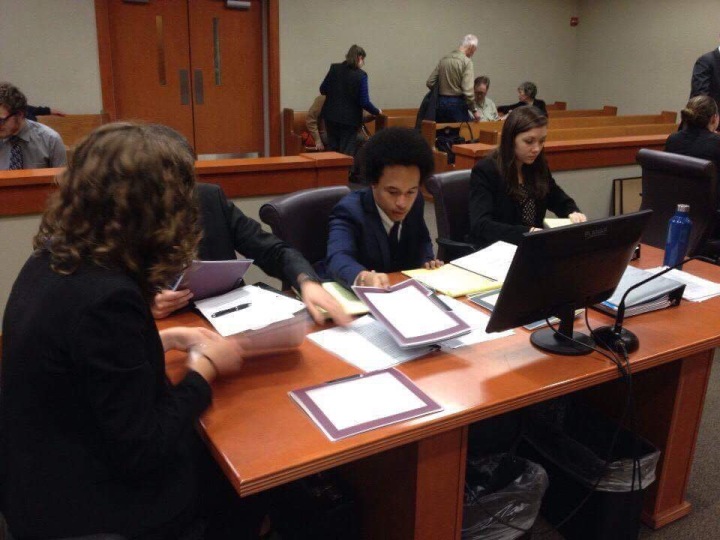 To learn more about how Hendrix’s Mock Trial program got started and how it has been able to be so successful, I interviewed Brittany Castille-Webb ’15,  a founding member of Hendrix Mock Trial; Sami Sexton ’17, President of Mock Trial this year; Ginny Greer ’19, who was part of the team that went to ORCS this year; and Charlotte Thomas ’17, Co-Captain of Blue team. Be sure to follow Hendrix Mock Trial on Twitter at @HDXMockTrial or on Facebook at ‘Hendrix College Mock Trial’ to keep up with their  individual and team successes next year!

When I was selecting colleges, I was initially torn between Hendrix and Rhodes. I was much more enamored with the politics department and general feeling of openness at Hendrix, but Rhodes had a mock trial program. I had participated in mock trial throughout high school, going as far as representing Arkansas at the American Bar Association’s National Mock Trial Tournament. It was an activity I enjoyed and wanted to continue. However, I eventually chose Hendrix College and just resigned myself to finding similar activities, which were far and few. But at the end of my freshman year, a friend and classmate, Will Vanscoy, who also attended my high school and competed in mock trial, approached me with an idea: what if we started our own team? We contacted Mrs. Mary Richardson, who agreed to be our faculty advisor and Armeen Neshat, a junior who lead the speech and debate activities on campus, joined in. By the end of the 2012 Spring Semester, we received approval. Mock Trial had come to Hendrix.

I expected the first year to be difficult and in several aspects it was. We had a steep learning curve to overcome- the American Mock Trial Association (AMTA) didn’t power match based on experience. Our first round of competition could have us facing another new team or a team from a program that has existed for the past 20+ years. But we quickly sought out new members and got to work. Shawn Johnson, a Hendrix alumnus and Senior Assistant Attorney General, volunteered to be our attorney coach. Shawn would drive up from Little Rock twice a week and work with us on court procedures, objections, and hearsay rules for hours at a time. In our spare time, we worked one-on-one to develop case theory and direct and cross-examinations. It was a lot of work and many long hours trying to piece together an odd civil case about a diving accident, but we all loved it. We spent so much time together we could anticipate each other’s strengths and weaknesses on any given part of the trial. We were competitive too- when we competed, it wasn’t apparent we were a new team. That first year, Nigel Halliday walked away with a near perfect attorney record. The best part, though? When we faced Rhodes that first year, we won both our ballots.

I spent three years with the Hendrix Mock Trial team. During that time, I saw students grow and develop confidence in themselves-which seems paradoxical, I know. Mock Trial is about taking a fictional case and inserting yourself in that narrative to develop a theory, so finding yourself when you are trying to be someone else doesn’t seem to make much sense. But maybe having that freedom to step outside of oneself made it easier to grow that confidence; or maybe I am just reading too much into it. Either way, in just three years, the program expanded into two competition teams. Freshmen who were nervous about trying out in 2012 were quickly and competently leading teams by 2015. We were consistently competitive and our team and individual awards reflected that. We were (and still are) the only collegiate Mock Trial team in the state of Arkansas and I could not have been more proud for how we represented our state and school.

I love finding little parts of the case that other people might not notice, like a time stamp on an email that contradicts something a witness says. It’s small, so not every team notices it, but if you use it properly, it can make a difference.

I also love cross-examining the opposing team’s witnesses. They don’t always know what to expect, and if you have a good cross, you can throw them off, lower their credibility, or get them to admit facts that are really helpful to your case.

2.) What do you get out of or learn from Mock Trial?

I’ve gained a lot of confidence in my public speaking abilities, as well as in my ability to think on my feet and respond to arguments. And since I plan to go to law school next year, I’ve also been able to get a preliminary understanding of some of the Rules of Evidence and to apply that knowledge in making objections. We’ve heard from the attorneys that judge our tournaments that activities like this can be really valuable in preparing for law school, so I’ve loved having the opportunity to compete.

3.) What is it like to make it to ORCS for the second straight year?

We’re a completely student-run program, so it’s been exciting to know that we can compete with teams that often have far more funding and full-time attorney coaches. We’ve only had a team for five years, so the fact that we’ve made it to ORCS two of those five years really shows our potential for the future.

4.) What was the high school tournament like? Why did the team decide to try to put this on,  and is this something Hendrix Mock Trial will try to host in the future?

We’ve wanted to host a high school tournament for a few years. It gives our team members a chance to serve as judges, which helps us understand what judges might be looking for at our competitions. Additionally, there just aren’t that many high school mock trial tournaments in Arkansas before the state tournament; the teams that attended were so excited to have a chance to practice their case in a lower pressure setting. It was a valuable experience, and we will definitely try to host a tournament in future years as well.

I got involved in the mock trial program because of my OR leader, Liz Forrester, who was the president of the program last year. I’ve strived for a long time to become an advocate for the Americans with Disability Act. I expressed my interest to Liz, and she suggested I join the program to explore the legal system through a simulated trial experience.

I’ve enjoyed both the social and educational aspects of mock trial. It’s incredibly rewarding when our team earns awards at competition because you think of all the hours of preparing case theories, practicing direct and cross examinations, and rehearsing and rewriting opening and closing arguments you put in over the semester and realize it all proved fruitful.

I would certainly recommend Mock Trial to students who are interested in sharpening their critical thinking skills and developing confidence with public performance, either in the context of an attorney roll or a witness character. Mock trial offers a wide array of opportunities for people of different majors and interests. A lot of people probably think it only appeals to students interested in law school, but in fact the program benefits from having students with diverse talents.

My advice to first year members would be to come with confidence and a teamwork-oriented mindset. The rules and case law can be intimidating at first blush, but the more you brainstorm and practice with fellow team members, the more natural it feels.

Sometimes at competitions, I’ll cross examine a witness for the other side, and I’ll ask a question or a series of questions that just completely annihilates their witness. It’ll catch them off guard or make them look really bad, and it’s really fulfilling. This happens sometimes I’m a witness too. I’ll answer a question, and the crossing attorney for the other team will get stumped. One time a girl even started crying when she was cross examining me. I don’t want to say I get joy out of other people’s pain, but it’s definitely exciting because that usually means I’m doing something right if they’re getting frustrated.

At the risk of sounding cheesy, I really enjoy the friendships I’ve made from Mock Trial. Our team has always seemed to get along well, which I really think does enable success in a huge way. Team morale is a really overlooked but crucial aspect.

2.) What do you get out of or learn from Mock Trial?

It teaches you how to make arguments, whether or not you agree with them, and you learn how to clearly and concisely articulate your stance. It also, of course, teaches public speaking and confidence, which go hand in hand. It’s amazing how you can say something completely wrong, but if you say it with confidence, a lot of the time no one will even question it.

3.) What is it like to make it to ORCS for the second straight year?

Making it to ORCS for the second year in a row was extremely humbling and so exciting. When we made it last year, I think we all considered the fact that it was a little bit of luck. But after qualifying for the second year in a row, it really solidified the fact that we deserved to be at ORCS and that we were on the same competitive level as schools like Emory and Duke.

This year, Hamza and I became the captains of Blue Team, and we felt like we hardly knew what we were doing. I don’t think we ever thought we would qualify for ORCS this year.