It’s that time of year again. The leaves are falling, the air is getting cooler and stores are marketing their pumpkin spice products as if the world is ending tomorrow. But most importantly, it’s time for the return of fall shows. Here is a guide to four of the most popular shows so you and your friends can take a break from the books, make some popcorn, kick back and relax. 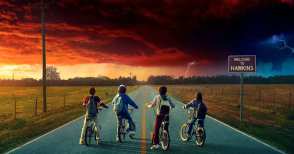 nce-fiction Netflix-original drama returns with nine new episodes on Friday, Oct. 27 for its second season. Season one opens in 1983 in the fictional town of Hawkins, Indiana. Researchers at Hawkins National Laboratory, who ostensibly perform scientific research for the United States Department of Energy, discreetly execute experiments in the paranormal that involve human test subjects. These experiments begin to affect the lives of residents in Hawkins. The first season focuses on the investigation into the disappearance of a young boy named Will Byers. The second season will be set in 1984 and deals with the characters’ attempts to return to normalcy after the previously turbulent year.

This hit medical drama is the show that just keeps on living. That’s right, Grey’s Anatomy returned to ABC on Thursday, Sept. 28 for its 14 season. It will have a total of 24 episodes and airs every Thursday at 8/7c. Set in the fictional Grey Sloan Memorial Hospital in Seattle, Washington, the show focuses on the lives of gorgeous doctors and medical conundrums. It is chock-full of surgeries, sex, drama and then more sex. If you’re someone who watches this show to procrastinate doing homework, it’s not a total waste. You tend to pick up on some medical jargon while watching, so it’s essentially an educational program.

This new family drama returned to NBC for its second season on Sept. 26. It will consist of 18 episodes and airs every Tuesday at 9/8c. The show follows the lives of Jack and Rebecca Pearson and their children Kate, Kevin and Randall. Kate and Kevin were part of a triplet pregnancy, but their biological brother was stillborn. Their parents decided to adopt another newborn, Randall, a child born on the same day and brought to the same hospital after his biological father abandoned him at a fire station. The main attraction of the show is how the episodes portray the characters’ past and present lives, with scenes taking place in the 1980s, 1990s and present day. It will make you laugh. It will make you cry. Just make sure you have a box of tissues handy.

This American anthology horror series premiered on FX on Tuesday, Sept. 5 for its seventh season. Each season focuses on a new storyline and introduces a different set of characters and settings. The current season, subtitled Cult, takes place in Michigan and centers around a cult terrorizing a suburb in the aftermath of the 2016 U.S. presidential election. It will have eleven episodes and airs every Tuesday at 10/9c.