The curtains drew shut close to midnight, and after a brief topple and tumble of the massive jewel-encrusted tiara, we have a new 2018 Miss Hendrix. This year, the title was taken by none other than Briyoncé, lovingly portrayed by senior Brian Earles.

First-Runner-Up and Mister Congeniality were both awarded to the regal Raja LaWhore,

played by senior Laela Zaidi, while Second-Runner-Up went to Shaqueera, Senior Raul Contreras. Lady of the Night, awarded to the king or queen responsible for raising the most money in the week leading up to Miss Hendrix, went to Lippi Cockstocking, Senior Pete Wills. Despite not having a title to show for it, Thrustin Deeper—Bailey Egan—and Carrie LovesYourWood—Bailey Price, both made memorable showings as well. 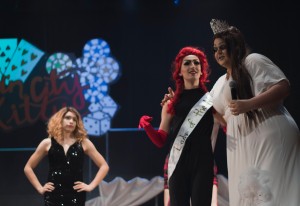 When it comes to the all around quality of the show this year, Earles is quick to show support.

“The other contestants were amazing,” Earles said. “They all brought. There was some fierce-ass competition this year and it was awesome to see Miss Hendrix brought to that level.”

This year marked a new caliber of Miss Hendrix. Not only did a drag king place for the first time in Miss Hendrix history, but the 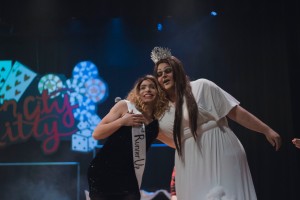 guest performance was also innovative with an interactive and personal performance from Peppermint, runner-up of RuPaul’s Drag Race Season 9. Throughout the performance, the amount of work going into the dances, costumes and characters was clear. For Earles, this meant months and months of effort.

“I choreographed my own contestant piece

which was amazing,” Earles said. “It was so much fun to get to work with all those wonderful people. I did a lot of the costumes myself, I also had had help from my friends. It was important to me to put in as much work as I could because I felt letting someone else do all of it for me like—oh put my clothes together, do my mix for me, do my choreography or do my makeup for me. It was important for me to be involved in everything, if not do it myself. As a contestant, its important that you put in the work too and that you recognize all the people that help you along the way.”

After all of this work, for Earles, the moment of winning was nearly surreal. In the moments following “and the winner is….” seconds seemed to stretch on and on.

In spite of the excitement, Earles remains aware of the implications of Miss Hendrix beyond the admittedly phenomenal crown. The competition maintains its status as both a massive fundraiser and a chance to celebrate Trans and Drag culture.

“I’ve been involved in Miss Hendrix every year since I was a freshman,” Earles said. “It is so important to me to be able to give back to the community, to be involved in something that brings the queer community to the forefront. We don’t often get to see that, and I feel like Hendrix College, Miss Hendrix, is the place to do that. So be proud of that.”