“I decided to run for Senate 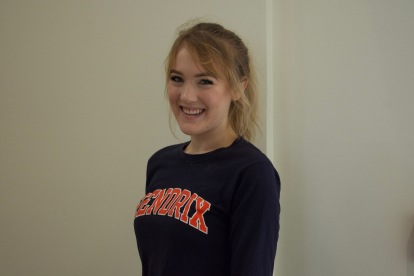 president because I thought I could bring a fresh perspective,”  Burdette said of her new position. “Previous senates have had the hearts in the right place, but there has been a slow movement towards progress. I thought it was time for fresh blood.”

Burdette cited her experience from working in different areas at Hendrix as qualifications. Burdette has worked a job as a Resident Assistant, a COGS representative for Veasey Hall, and was formerly a member of the Hendrix Financial Committee.

“I think I am in a unique position because I know what it’s like to not know how Senate works and that perspective will allow me to help other students learn about Senate.”

Much like Hannah, Presidential Assistant Natalie Burgess, has had little experience working for Hendrix Senate.

“I am just now a freshman, but I am [involved in] Young Democrats of Arkansas and I know how to be on boards and work on issues.” Burgess said.

Burgess is a Political Science Major. She felt that joining Senate would be a perfect position for her personal goals.

“I joined the cabinet because I want to get more experience with political science organizations. I want to be on a team that works for improvement,” Burgess said. “I think I could have something to say as a freshman and be a voice for lower classman.”

“We want to be more transparent and be open to criticism. We want people to be comfortable talking to us,” Burgess said.

The Academic Policy Representative has a great deal of power to make changes to the curriculum. One thing the Academic Policy Committee is responsible for is the decision to keep the library open for later hours, or to change learning domains. Emerson’s attitude of change was echoed by Burdette.

“We want to empower victims and their allies and make the hearing process easier to understand and more accessible to students,”Burdette said.

Burdette plans on coordinating with executive committees and Dean Wiltgen to coordinate this plan. She also expressed excitement about the Diversity Working Group.

“We intend to re-address the diversity working group so that the group is more prepared to create action plans…. so that people can voice their concerns with Senate in productive ways,” Burdette said.

In other advancements, Burdette hopes to increase student access to the counselor’s office.

“One of the things we would specifically like to address is having more student organization leaders go through mental health training so that there are more people watching out for problems on campus,” Burdette said.

Above all, accessibility and incisively were very important to Burdette.

“I am personally very committed to making Hendrix a safe and inclusive and community-oriented,” Burdette said.